This weekend represented the kickoff of our second attempt at ultramarathon training. BB and I are now about three months away from the starting line of the Fragrance Lake 50km. There’s a lot to do between now and then. Even though we did a 20ish mile race three weeks ago, we were definitely on the lower edge of fitness for it. We have a ways to go before we will be confident in our ability to traverse 31 miles and 7500′ of gain.

Truth be told, our real training cycle begins next week, after we return from our annual Thanksgiving jaunt out of the country. But this past weekend we raced a reasonably tough trail half-marathon both to kick off our winter training season and to judge our fitness going forward. I’m a big believer in including races in your training, because there’s just no way to truly compare – especially on trails – training performance to race performance.

As I wrote before, the Grand Ridge Half was intended to ensure that we didn’t let our fitness just completely lapse after completing our big 50km goal race in October. Then injuries happened, and we didn’t do the ultra. We staggered through the 20 miler instead. So the Grand Ridge Half became an opportunity to see how we’d improved in three weeks, and hopefully make strides and be able to recognize that we were fitter and faster than a few weeks earlier.

We arrived at the trailhead at about 7:15am, to pick up our bibs, fresh-faced and excited to test ourselves against the appropriately-named Grand Ridge, just east of Issaquah in the foothills of the Cascade Mountains. 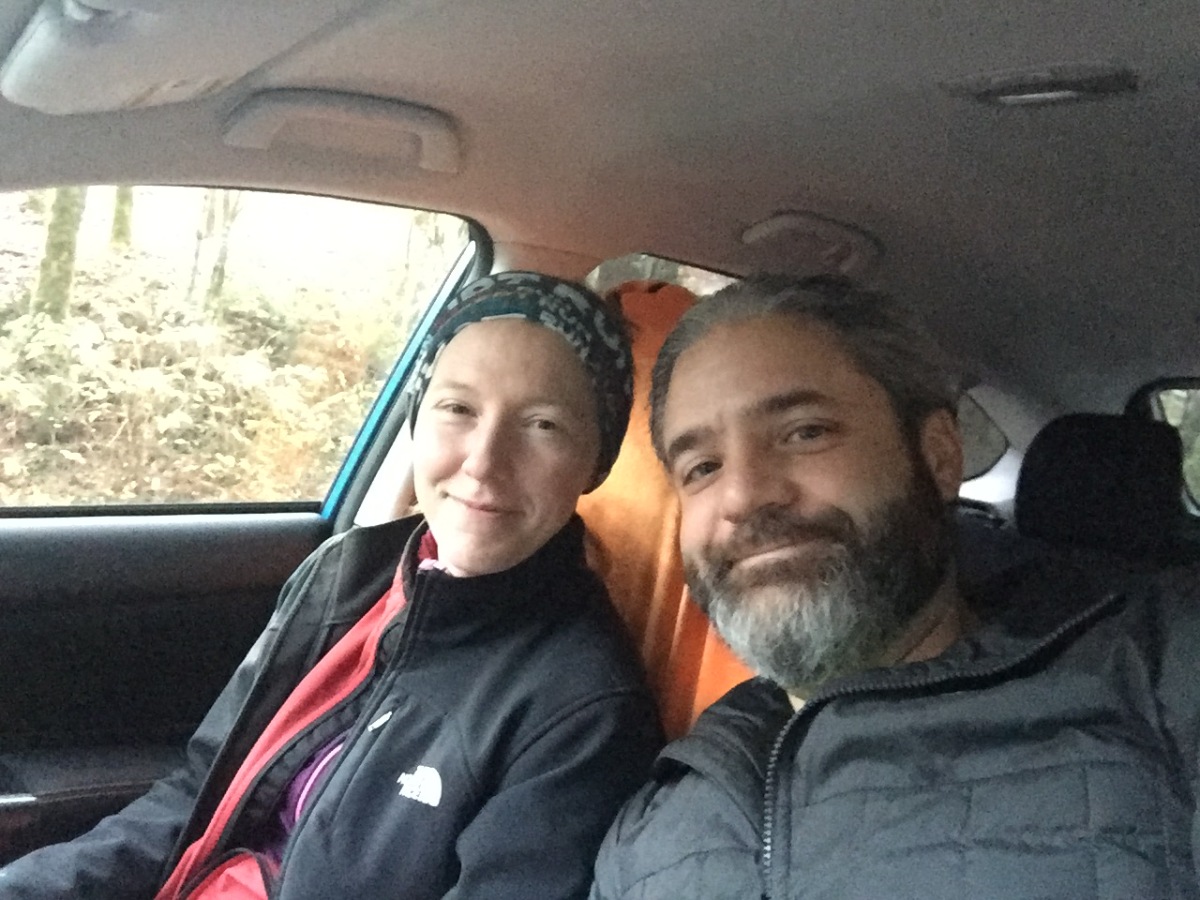 It was a cold morning, only about 36 degrees (That’s about 2C for our metric friends). And I was worried about getting really chilled waiting around for the start and 9am. But the time passed quickly and we were at the starting line before we knew it. It’s a reasonably challenging course, some technical trails (but nothing outlandish) and a lot of vertical gain. 2,300′ over the course of the race, which proportionally is about exactly the same as our 20 miler, which had 3900′.

I’ve run a total now, including Grand Ridge, of three trail races at 13 miles or longer. In the previous two, I was second-to-last both times. So my goal was to do better than that. And additionally, we wanted to complete this race on a pace appropriate to finish Fragrance Lake within the time limit. That meant maintaining at least 19 minutes/mile.

The race started on a wide flat gravel path, quite amenable to running side-by-side, and also to allow the pack of runners to spread out and get in line for the single track portion (which was the rest of the race).

Soon enough we were climbing up the ridge. The race course was an inverted lollipop, where we did a short loop followed by a long out-and-back. There was one aid station which we passed twice, at miles 4 and 11, and then a water-only station at mile 7.5. 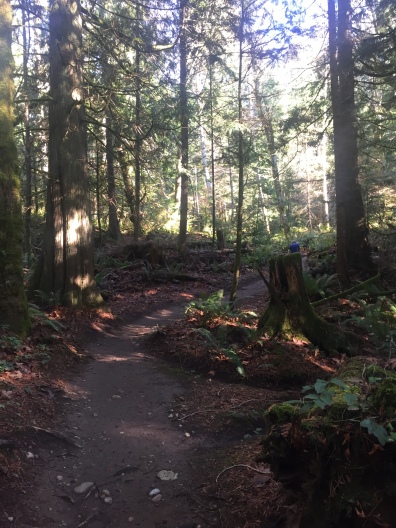 The aid station and volunteers were great (photographed and posted with permission). Lots of tasty food (including hot bacon!) and Nuun hydration fluids.

After that first time through the aid station, we did a long descent into the valley, and just like I seem to always do, I turned my left ankle at mile 6.5. It hurt and I swore and some dude passing back by me headed the opposite direction said, “Oh, that sucks!” and suddenly I knew the rest of the day was gonna suck. I keep reinjuring that same ankle/foot right as it feels like it’s getting better.

We finally found the bottom of the course, and the water-only aid station, and turned around groaning to trudge up the long hill. And then something strange happened. The hill flattened out. Even though we were covering the same ground we’d just covered. And even though it had felt like a steep descent. The way back really felt like a slow rise, mostly-runnable, with not-terribly-technical footwork. Both BB and I were puzzled about how manageable of a grade it felt like.

Looking at it, it looks nasty. It’s about 900′ of gain over 2-3 miles. But it rarely felt too challenging from a climbing perspective. Not nearly as bad as the prior climb to get over the ridge. And so we mostly slow-jogged up the hill as my feet slowly turned to hamburger from the pounding.

There was a lot of pain for the last 3-4 miles. The soles of my feet just really need to get into much, much better shape. Even our little 10 mile training run last week was challenging from a foot-pain perspective, and if the 50km feels like this did? I’m gonna be really, really unhappy. I expect some pain, even a lot. But I don’t know if I can tolerate 18 more miles of when I went through Saturday.

But suffering is how you harden up. And so I expect that I will be much better-positioned by the time Fragrance Lake comes around. Hopefully only the last 5-10 miles will be real agony!

We descended back down to the start, taking the shorter leg of the loop to complete the lollipop.

We finished in 3:19 minutes. We came in 116th and 117th of 145 total. Still toward the back of the pack, but a massive improvement from three weeks ago for me. I was 53/61 men. And I was still last in my age group. But that’s ok. I performed much better and felt much stronger, even though I was in a lot of pain for a lot of time.

This was a well-put together race: good aid, good markings (even though BB had to yell at me for wandering off course once, it was clearly marked), clear instructions. There was also a marathon and a 50km at the same time, on the same course. But it didn’t overwhelm the trail, and everyone was positive and encouraging as we passed each other multiple times.

So we took a step forward in both confidence and performance. I need to strengthen my feet considerably, but I think that will come with more time and more pain. It certainly has when road running. And so for now, with about a week of easy recovery time coming up, and no long runs this coming weekend? I feel good about where we are and getting to where we need to be.