Gene and I are starting to build mileage and vert again for our 50K training. We want to be sure to have some long runs where we’re actually running a while and some days when we’re plodding up—and down—long hills.

We use a combination of Washington Trails Association and AllTrails to find routes in range of our goals for a run or hike and to check trail conditions. I paid for AllTrails Pro when they had a good sale this summer, which gives us the flexibility to plot custom courses on the trail maps. This week though I found a good option by filtering the AllTrails search on distance and gain.

Our experience is that GPS-tracked distance and vert tend to be about 5-10% more (and G’s Garmin tends to record distance about 5% longer than mine). A little bit of that is going off course a bit and having to backtrack and resume. But even when we run the route perfectly, there’s still a bit of “trail tax.” We were aiming for about 12-13 miles on Sunday and wanted some decent elevation gain. The Wilderness Peak and Squak Mountain Loop is reported at 12.7 miles with almost 3600 ft gain. It covers Cougar Mountain Regional Wildland Park (a King County park) and Squak Mountain State Park in Issaquah, about a half hour drive from Seattle on a weekend morning.

Saturday night I downloaded the GPX file from AllTrails (an option for Pro users under “More”) and imported it as a course in Garmin Connect, which we downloaded to our watches. We prepped our hydration packs and gear. Then Sunday morning, we had some granola, picked up coffee, and headed out.

We’ve been to both Cougar and Squak Mountains but from major trailheads. This course starts a little off the beaten path, so it took us a few minutes to figure out where to park. We finally figured out that there was space for a couple of cars where the Bear Ridge Trail from Cougar Mountain Park meets SR900/Renton Issaquah Rd SE (see annotation on map image; Google Maps here). 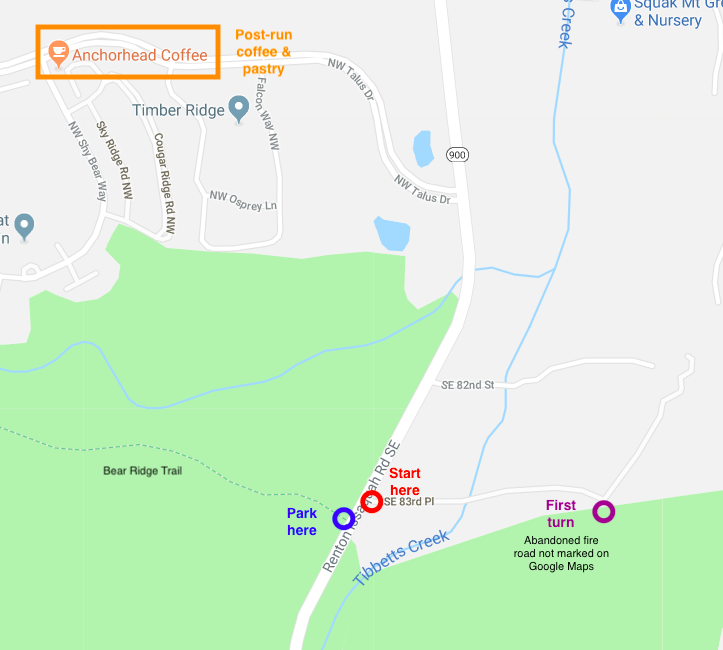 As we arrived, a quartet of runners (3 human and 1 doggo) came down Bear Ridge Trail, and we asked them about getting to Squak from there. They were actually headed that way, but we didn’t want to hold them up while we got ready. They explained how to find the trail. Across the main road from Bear Ridge Trail, there’s a small street (SE 83rd Pl) marked as a “Private Street”. Go up it, and “as it looks like you’re going to drive into someone’s house, there’s an overgrown fire road to the right.” Follow the fire road and watch for the first trail on the left. Sure enough, that got us started.

The course starts with a long hill, about 3/4 mile at a 14% average grade followed by another mile at about an 11% grade. The trail for the first segment of the climb is a bit overgrown this time of year but still pretty easy to follow. The initial climb was followed by interspersed 2 runnable sections and 2 shorter climbs at ~13-14% grade, bringing us to the top of Squak Mountain at Microwave Station 2.

As if rolling out the welcome wagon for our 50K training, Sunday brought rain from start to end—not very heavy but almost constant—and temps in the mid 40s (F). For much of the run on Squak, we had good protection from the trees, but approaching the top we got a bit more exposure.

From the summit, there was a bit of downhill and flat trail before another short climb. Then after the trail flattened out for a bit, the 2-mile, 1300 ft vertical descent began. Here we began encountering more puddles and water flowing down the mountain. Par for the course, Gene turned his foot somewhere around mile 7, about halfway down the mountain, but was still able to keep running.

The descent took us out of Squak Mountain Park and back to SR900. I had been fighting a cold all week, so we had a bail out plan here. We could turn right and follow SR900 about a mile or so back to the car, giving us about 9 miles total. SR900 is pretty heavily trafficked but has a wide shoulder.

I was feeling OK though and really wanted the miles, so instead we turned left on SR900. The entrance to Cougar Mountain Park (Squak Mountain Connector Trail) is just a tenth of mile down the road on the right, across the road from Pacific Topsoils (if you ran the Cougar Mountain 20 miler or 50K, this is where the former turned around and the latter crossed to head up Squak).

Cougar Mountain starts immediately with a climb, but after 2 miles running downhill, it’s kind of a nice change. The climb continues for not quite 2 miles at about a 12% grade. After a short downhill, there’s about a mile of relatively flat terrain. The run ends with another 2 mile long downhill with about 1100 ft elevation loss. A couple of miles from the end, you can start following the trail markers for Bear Ridge Trail and SR900 to get back to the start. We clocked in with a final tally (from G’s watch) of 13.8 miles and more than 3800 ft gain. 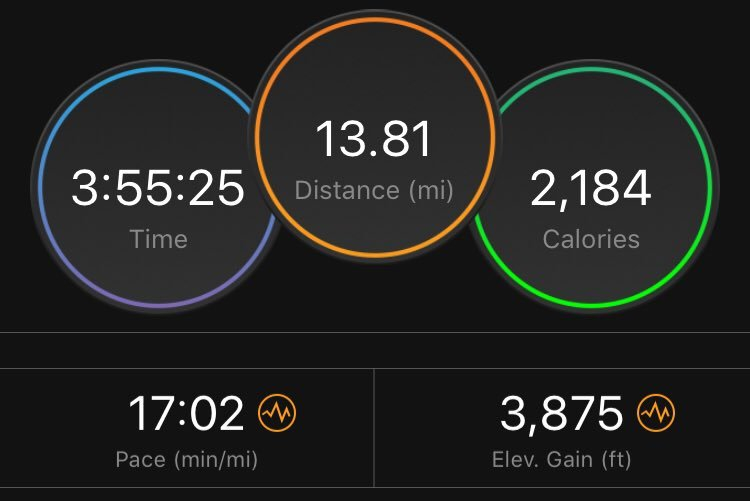 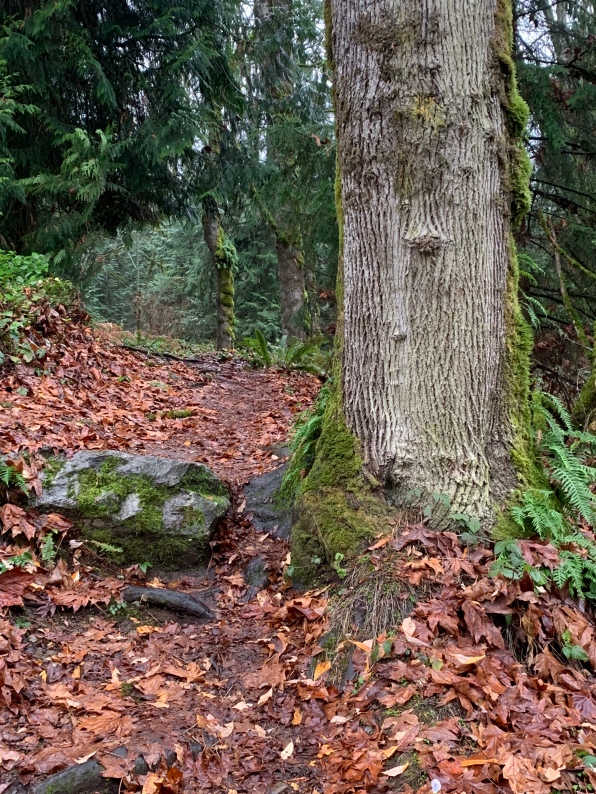 The great thing about this loop (other than long climbs and descents, if that’s what you’re looking for) is the trails never get too technical. There are some occasional stretches where the path is wide enough for 2 or 3 people, but it’s mostly single track—usually dirt tree roots and occasional rocks, some with nice soft leaf and pine needle cover, and some gravel. There wasn’t even much mud, despite the recent and ongoing rain.

Another excellent thing: When you’re back to the car, you’re less than a mile from Anchorhead Coffee. The coffee is fantastic. The food selection is limited but delicious carby goodness after a long run. They will even put a cinnamon roll in a waffle iron and serve it to you with maple syrup (called a “quaffle”). 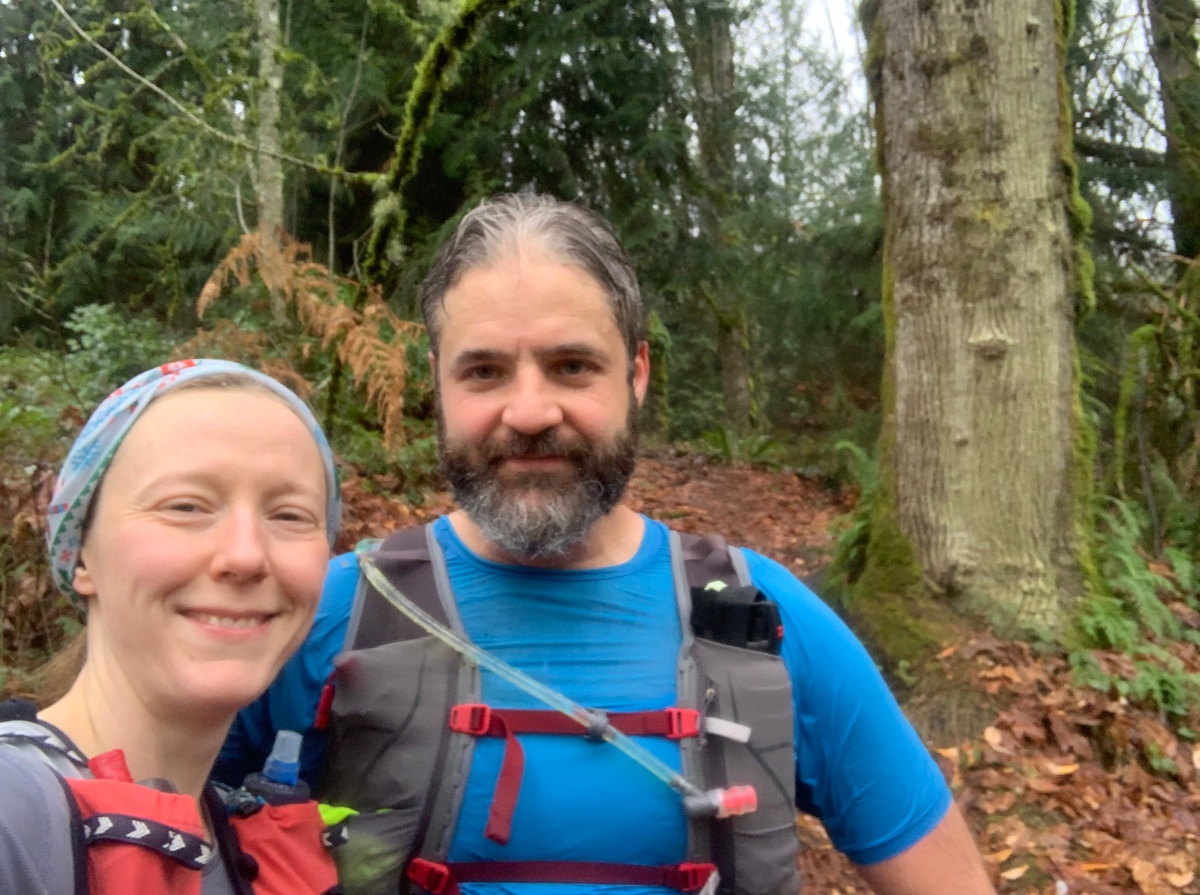