We continue to run little races when they fit in to our training schedule. This past week has been a cutback week (I ran about 16.5 miles and BB ran maybe a few more), and we were resting up after last weekend’s cumulative 23.2 miles and over a mile of vertical gain. I’m a big believer in staggering my vertical gain weeks. Having a week with 6,000′ followed by a week with about 2,000′, even when still building distance. That helps me keep from overloading my troublesome hip.

So we had six miles on the schedule this past Sunday, and BB found the Northwest Trail Runs Absolution Run, a trail race in St. Edward Park on the east shore of Lake Washington, here in the Seattle area. They have a 4 mile option, and an 8 mile option, which is two loops of the 4. Typical of NW Trail Runs, it was well-managed, well-attended, and started about 9 minutes late.

94 people laced up for the 8 mile, including me and BB. 44 men, and 50 women. As I’ve been rebuilding after injuries, I’ve been bringing up the rear in a lot of trail races lately. But I felt pretty good going into this run, especially considering that with the cutback week, we’d basically executed a perfect taper for the event. BB and I decided to run our own races instead of sticking together.

I went out and elbowed my way around some slower, side-by-side runners on the single track, but BB got caught up in a scrum. I found myself running in a comfortable gap at an 11:30ish pace, and feeling really good. The first couple of miles were flat and then there was a steeper, slightly technical descent of about 300′ down to the shoreline. That was where BB caught me and forged ahead. She’s so good on the downs. 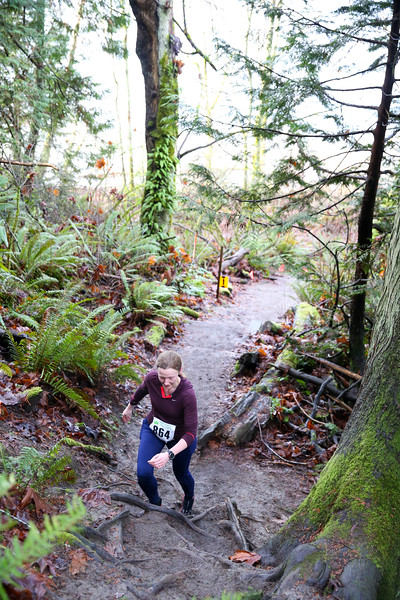 I returned the favor on the ensuing hill though, pushing hard with a power hike up the 300′ embankment and leading into the rolling section before the midway point. Overall, the first lap came in according to my watch at 3.5 miles and 650′, though there was a half mile section after the “lap” point that led back to the start for the second lap. I grabbed a glass of sparkling cider and some potato chips and dried mango slices and headed out for lap #2.

The course really cleared out at this point as the 4-milers all finished up while I was up on the higher plateau. The mile with the hill in it took me 15 minutes, but other than that I was knocking out 11-12 minute miles and feeling great about it. I even chatted with a nice Dutch man I caught up to on the second lap for a while, and then had the legs to pass him up and descend the second time with my fastest mile of the race, about 10:50.

I was definitely feeling the hill the second time I climbed it, but I was still able to reel in two other racers and leave them behind as I powered through to the end. I finished with my GPS showing 7.6 miles and 1260′, in 1:36. I felt really proud of how I ran and the consistency of my time. All my miles were below 12 minutes except the two with the big hill, which were both in the 15ish range.

And rounding out my happiness with the result was finishing 46/94 overall, just cracking the top half, and 27/44 men. BB finished 51 overall, and 23/50 among women. That shows just how good our fitness is getting again. My overall pace was about 12:22, which is great for a race with more than 150′ gain/mile. Our 50km upcoming is closer to 244. So it’ll definitely be slower, and not just because it’s longer. But I’m getting to a place where my runs are legitimately runs, rather than speed hikes.

I am always happy just to be out there doing hard things. But it is extra special when I can feel like I’m competitive. Not to win, or even to place in my age group. But just to be in the middle of the pack is what being competitive means to me. I am in the middle of the pack among people, and among men, who recreationally run 8 mile trail races. That makes me feel fit and accomplished.

It was a great way to end the year, and feel well-positioned to take on the big challenges of the new year. Happy running, everyone!