For the first time since moving back to Seattle, I returned to the Olympic Mountains, with BB in tow. We decided to try to bag a peak on the peninsula. We found Mt. Ellinor, which seemed a good candidate. Just shy of 6000′, with the trail head starting at about 2700′, and a 3.5 mile ascent, we thought it would make a nice but not too terribly strenuous hike. So we got up at 0500, and – loaded with all our mountain survival gear – headed out to the trail head, about a two hour drive away.

We headed up from the trailhead at 0807, looking forward to the adventure.

The trail starts out in a lush forest of large evergreens covered in witches hair and other kinds of soft pale moss. Ferns and ground cover are everywhere, but not thick. There was intermittent mist that looked beautiful in the forest.

I’m not sure how to describe it. The Olympics and the Cascades are just slightly… different. Maybe the trees are a slightly different species. There’s definitely more witch’s hair in the Olympics. Whatever it is, there’s a feel to the Olympics that is somehow palpable and unique. It’s a tiny mountain range, entirely geologically unique, young, and steep. They’re not high – the highest peak is Mt. Olympus at 7962′ – but considering they rise directly from sea level, they represent a sudden and imposing wall of basalt towering over western Washington.

Mt. Olympus has 7800′ of prominence. By comparison, Mt. Elbert, the highest point in Colorado, at 14,440′, has about 9000′ of prominence. So the height from base to peaks of the Olympics compare pretty favorably with the Rockies, or other major mountain ranges. They’re no joke. It’s a small mountain range, but they’re forbidding and challenging peaks.

They’re also chock full of wildlife – goats, bears, mountain lions – but the biggest ground animal we saw was a chipmunk. We saw some amazing birds though, including a few enormous birds of prey which might have been large hawks or golden eagles. And truly beautiful flowers, like something out of a Dr. Seuss book. Including this Trillium.

The trail climbs at about 700′ per mile for two miles, until it takes a challenging turn in the woods where finding the trail is difficult and then the steepness increases dramatically. You climb “the chute”, which is an extremely steep snowfield which, in late May, was actively melting. The snow had formed a crust bridge over a stream below that the meltwater created. The bridge of snow was thick, and felt pretty stable, but was clearly eroding fast.

It’s hard to tell from the photo, but that’s about a 40% grade, with a glissading track worn in the snow. The edges where the snow pulls away from the rock allow you to see 10 feet down to the stream bed, covered in boulders. There were postholes where people had stepped through the snow, and thin, frangible edges where it was clear the snow was paper thin.

This was the high point of our climb. We didn’t feel safe going further. We’d gotten 3 miles in and climbed 2200 of 3200 feet to the summit. I felt that going back down on this melting snow in the afternoon, after another hour of climbing, was foolhardy.

If you’re going up, I’d wait a couple weeks to allow all this snow to melt and the path up to be rocky. Also, take care. A hiker noted on WTA.org in a now-deleted post that she vandalized the trail markers, to discourage people from taking what she considered a dangerous hike. Please don’t do that. That’s arrogant and makes the trail more dangerous, not less. If people get lost, they can easily die in the wilderness.

But we did see some spectacular views! 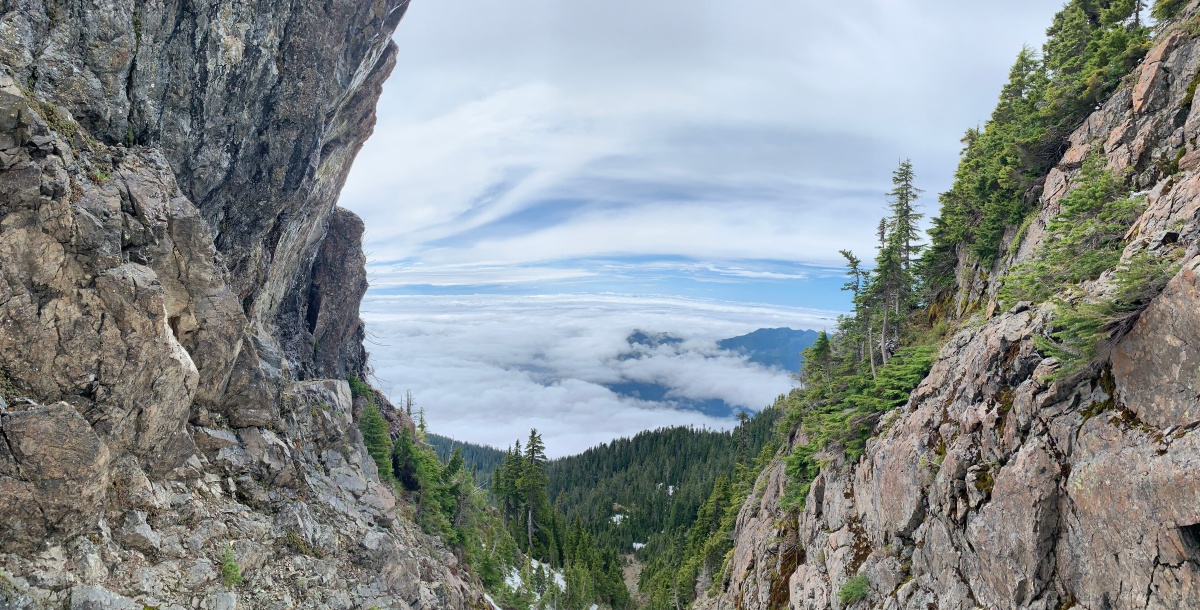 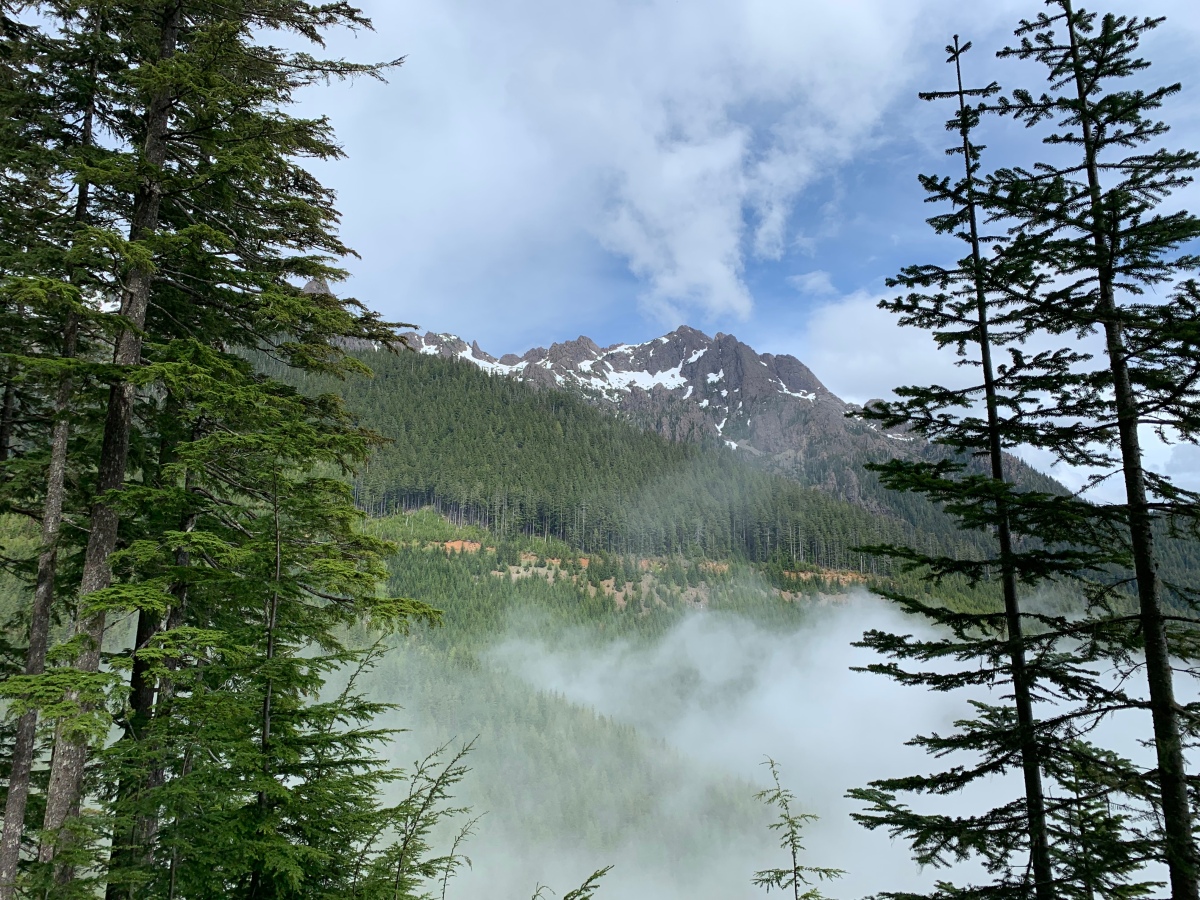 Overall it took us about four hours to go six miles, with a total of 2200′ gain. It was only another half mile or so to the summit, but there was still about 1000′ to climb on perilous snow bridges. So we decided to stay off the news and get home safely. We’ll try again in August when the conditions will be better.