This is the story of my race day. For more general info about the event, check out my review on BibRave.

Sunday Gene and I headed out early to the Cascades, driving about 1 hour 45 minutes to  for the Teanaway Trail Half Marathon from Northwest Trail Runs. This was our first time visiting the Teanaway Community Forest, near Cle Elum, Washington.

It was a beautiful clear day and heating up fast. Somewhere in the vicinity, it was 54F for the start, but it felt much warmer. Knowing it was supposed to reach the mid 70s during the run, I was wearing shorts and a tank top, and sitting as we prepped for the start, I was comfortable. I decided to not even bother with arm warmers.

There were 3 other race distances happening the same day. The marathon, taking 2 loops of the half course, kicked off around 8 am. A 10K and 5K started at 10 am. And we headed out with the half marathoners at 9 am.

Gene and I decided to run this race separately. I often get caught up in traffic, so I started a little further forward than typical. After a very short jaunt along paved road, we turned to what seemed like maintenance or logging roads—wide dirt path with vehicle tracks—running alongside the Teanaway River. Much of the course followed these types of tracks or local access roads, so racers didn’t have much need to jockey for position while on single-track. We were all pretty well distributed after the first mile or so.

Though surrounded by trees, the forests in Teanaway aren’t very dense, and they didn’t provide much shade on the wide roads. So it was clear that being mindful of the heat and sun from the get-go would be important.

I’ll be honest, reader, I was not feeling great in those first few miles. I went for a short shakeout on Saturday morning, and my calves were really cranky about the long hill. I sometimes have this issue, especially when increasing volume with vert or speed relative to previous weeks (check). Also I often get this feeling a few days before my period starts, which Garmin Connect reminded me was the case when I uploaded the activity. My stomach was also hurting a bit (something else that surfaces pre-menstrual).

I was hoping that Sunday would be better. As we started out, I was feeling that my effort seemed a little heavy for the pace, but I figured that might be race nerves, maybe going a little faster than I thought. Then as we started the initial climbs, I started to feel the tightness at the base of my calves. I walked the hills, reminding myself I was a little depleted and it was going to be a hot day. I decided to see if electrolytes in the form of Scratch blocks might help. And then my stomach complained—walk again. I heard Gene talking to someone behind me. By the time we reached the first aid station at about 2.2 miles, Gene had caught up. He asked if everything was OK. I muttered about my calves and waved him to go on. The coke wasn’t setting well either.

By the time my watched chirped at 3 miles, the calf tightness had turned to foot tingling, like when the circulation starts to seep back into an extremity that’s “gone to sleep”. I’d also had this happen before. I was trying to grit through it. Then I recalled one thing that seemed to disrupt the cycle—stopping to take my shoe off and adjust the laces. I looked for a spot along the path and ended up just plopping on an embankment to sit. I pulled off the shoe for the foot that was really bugging me, adjusted my sock a bit, put the shoe back on and re-tied it, then set off again. And suddenly my feet felt so much better.

Even so I decided to not push too hard too fast. I wasn’t entirely comfortable per se. I gave myself a silent little pep talk. Even if I can’t “perform” today, I’m outside! On trails! Enjoy it. Let me appreciate that I’m able to get out here and move at all.

I don’t know whether it was the 20 second shoe break or the quiet affirmation, but I started moving a little better. I spotted Gene a little ways ahead of me, and I caught a glimpse of the snow covered crags in the distance. 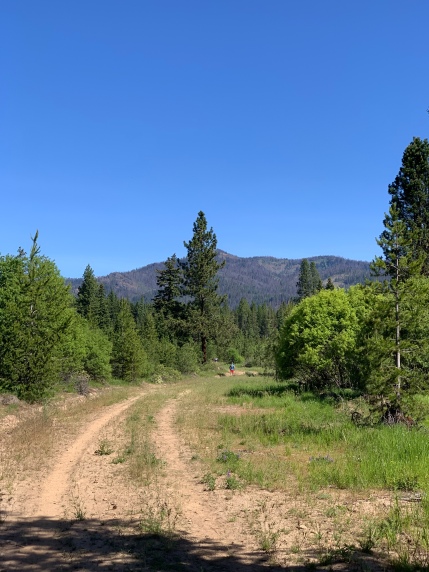 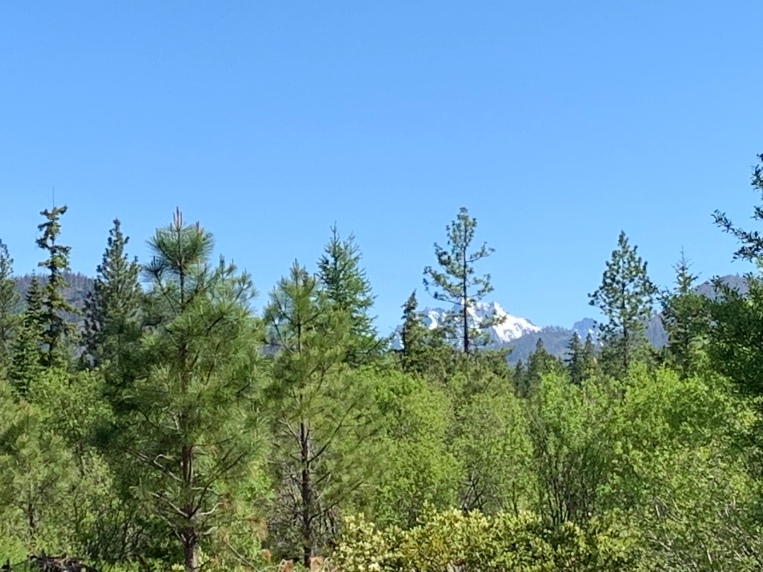 After this stretch, we finally made it into some good shade cover. We turned off the dirt road before we reached the cows and delved into narrower trails, covered with a carpet of pine needles. During one of the climbs in the woods, about 5 miles in, I caught up to Gene and then forged on ahead.

The forest opened up a bit, and a dry, narrow dirt trail lay before us, with grass and shrub and wildflower growing close. Somewhere in here, not quite at the halfway point, I supermanned. My toe caught on a root or a stick hidden at the edge, and I went flat, my sunglasses tumbling off in front of me. There was no one close enough to see the fall, and my ego was grateful. I picked myself and my sunglasses up quickly. No serious issues, just a few scratches and a coating of dirt on my front side. So I kept clipping along.

Though we didn’t have many views of the mountains during the run, the course wasn’t without beauty. The wildflowers showed off spectacularly.

We came back to wide dirt roads briefly for the second aid station, around 7.5 miles in. Given how my stomach reacted to the Scratch blocks and coke early, I only picked up some electrolyte drink. Back to the woods and then soon after a section that ran through a field. There was a bit of a muddy section leaving the field, and I nearly tumbled again. This time I somehow managed to keep my feet under me.

A little over 9 miles in, I saw a short, steep, sandy climb ahead, with a big granite rock sticking up. As I reached the little summit, I caught sight of the mountains. As I said, we didn’t see them much, but when we did, they were breathtaking—photos never do them justice.

The race was literally downhill at this point, though as is the case with trails, there were some small ups and downs. I’m decent on downhills, and I still had some gas in the tank for the shallow inclines. Luckily the trail widened again so I had space to maneuver around people as powered to the end. As I passed, we’d exchange some encouragement, Great work! Nice job.

With 1.5-2 miles left, we were back on tight, dirt single track, not much shade to be had. I was starting to get a little hungry, since I’d not really eaten during the race. The Tailwind I carried was keeping me fueled though. I took another swig and pushed on ahead.

The trail flattened out. I spotted cars through the trees. I knew we had to be close. And then the trail turned right. I was starting to feel the fatigue, or maybe my body/brain was beginning to relent because it thought I should be done already. But I wasn’t letting up now. I pushed and soon saw the road ahead. Across the pavement, down the gravel drive, and there the finish line was. I crossed just under 2 hours and 35 minutes—hot, exhausted, filthy, a little scratched up but pleased with how the race had turned around for me and that I hadn’t gotten stuck in my head early on. 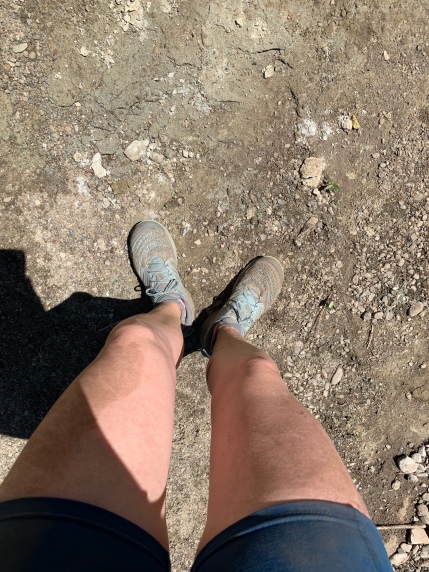 I immediately went to the river by the finish line to cool off and rinse a bit of dirt off. It was a glorious way to end a tough race. 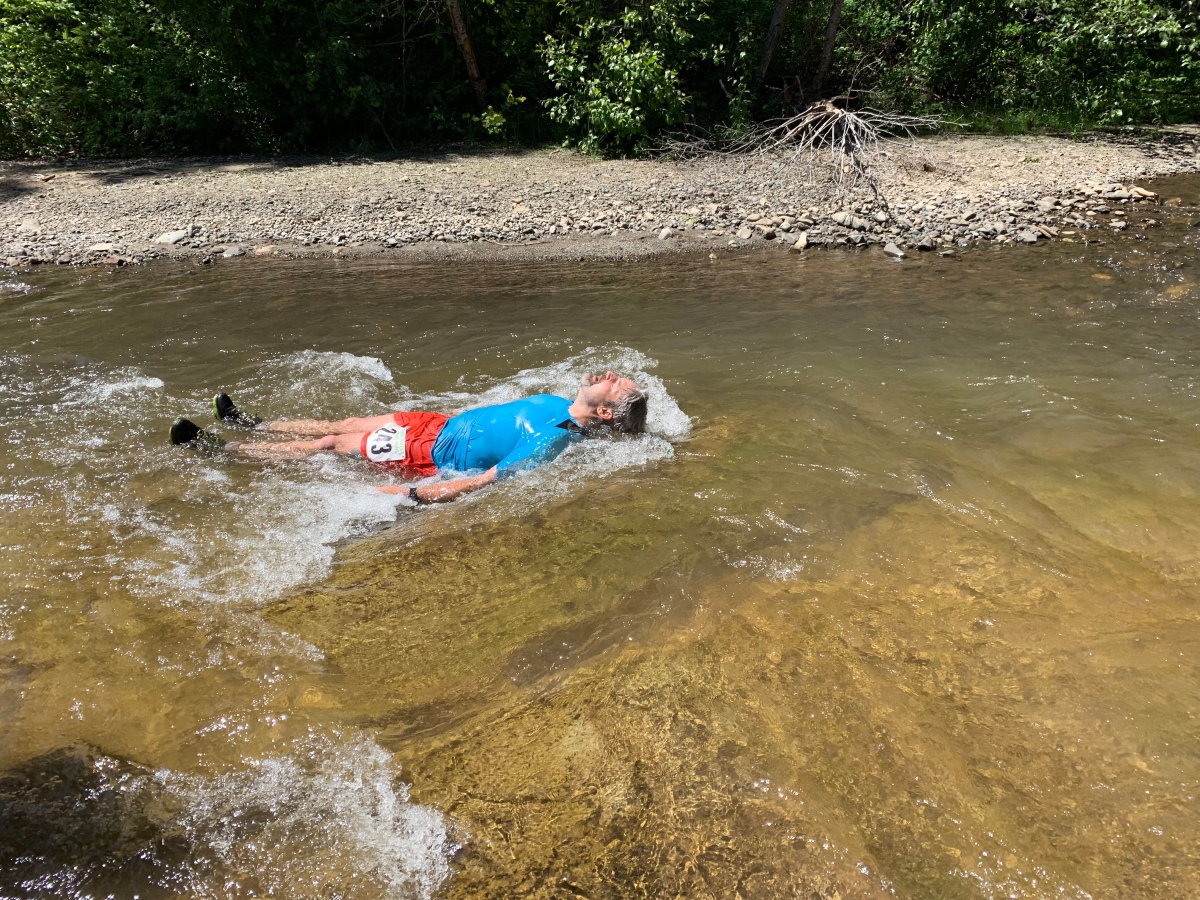 Gene came in about 15 minutes behind me and relaxed in the river a bit. We dried off and changed at our car, grabbed a hotdog, and then made our way home.