McClellan Butte is an iconic peak on the I90 corridor heading up to Snoqualmie Pass from Seattle. Its huge granite bulb juts out over dizzying couloirs that form avalanche chutes every winter and spring. 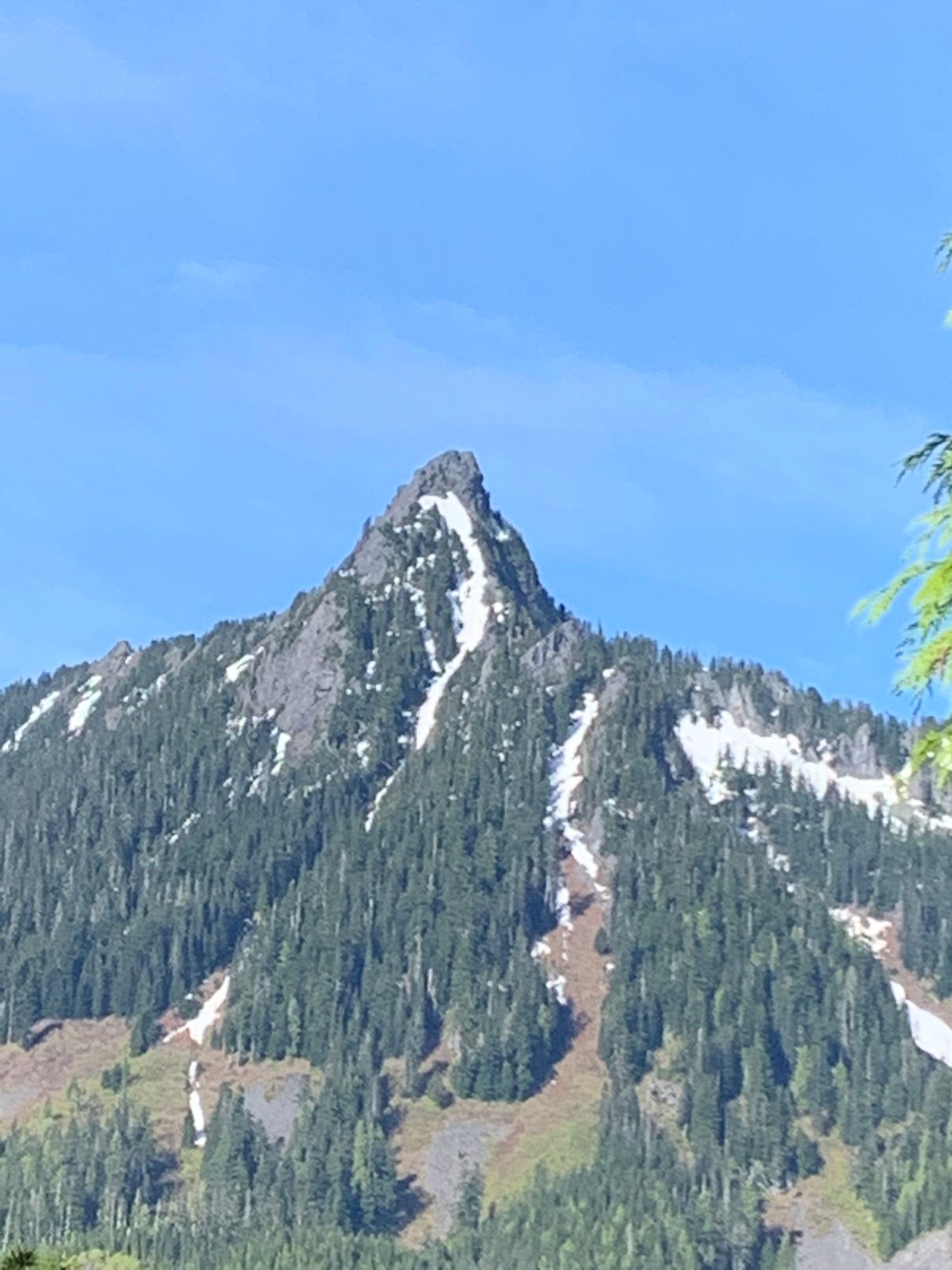 It’s impossible to miss on the south side of the freeway as you head east, and because it’s situated over the pass, it’s easily recognizable in the ridge of mountains all the way from Seattle. It’s definitely an imposing, authentic summit of the central Washington Cascades. Though it’s not especially high – the peak stands at 5,162′, or just a tiny bit less than a mile above sea level.

I have been asked by my work, along with everyone else, to take 10 furlough days so this past Wednesday I took the day off and decided to head up to attempt my first ever solo mountain ascent. I knew McClellan Butte would be a step up in difficulty. The final 100-150′ of the climb is a class 3 scramble with a lot of exposure. But I wanted to try something challenging and exciting alone. So I headed up to the trailhead at about 0830, and started climbing.

All the beta tells you that it’s about 4.6 miles up. It’s not. It’s 5.6. And thank goodness! Because there’s 3500′ of climbing, and only about 600′ in the first two miles. When I hit the 2 mile mark and thought I had 3000′ in 2.6 miles I was dreading it. But chuck in the extra mile, and it makes it a walk up with about 800′ per mile which is challenging but doable. The trail is smooth, non-technical, and well-maintained, with a few notable exceptions.

Crossing the couloirs is a touch harrowing. The first one was no problem, but the second gully is broader and was still full of snow. It had an incredibly treacherous snow-bridge that looked ready to fall at any time. There was a boot track over it, but I was not ready to test it. There’s a steep, scrambly way around that involves descending about 50 feet, crossing below the snowfield, and then hand-over-handing it out of the gully again on the other side.

After that, the trail crosses a few slushy snowfields but nothing to be concerned about. It’s just a long grind to the top. Where you hit the scramble. It’s a solid granite protuberance, rising out of the dirt. It sits on about a 60 degree angle, and has lots of knobbly places to grip. Going up was a breeze. You don’t notice the exposure because you’re constantly looking up. The footholds are large enough for your whole foot most of the time, and even though they’re slanted downhill, it feels very stable. Up I went.

The summit has incredible 360 degree views of the whole cascade range. It’s just stunning up there on a nice day. 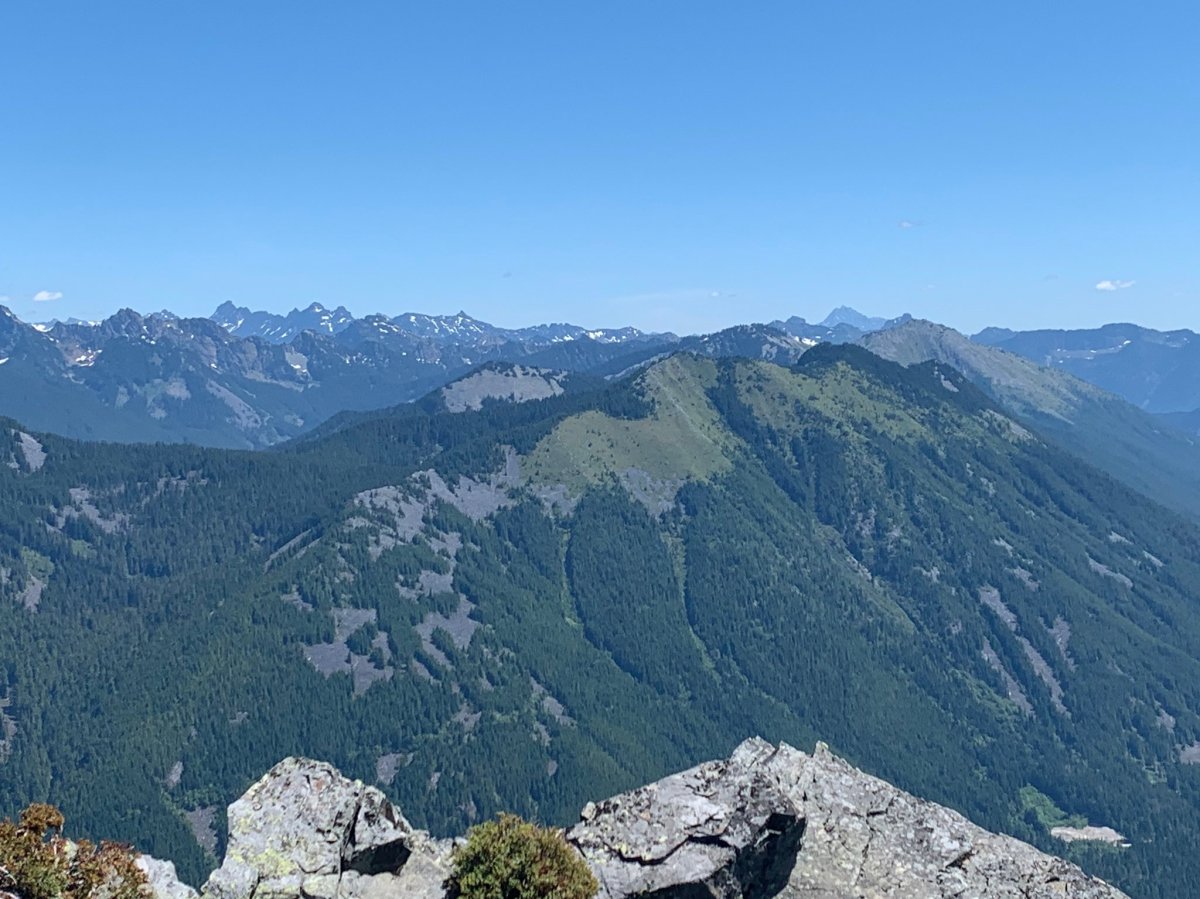 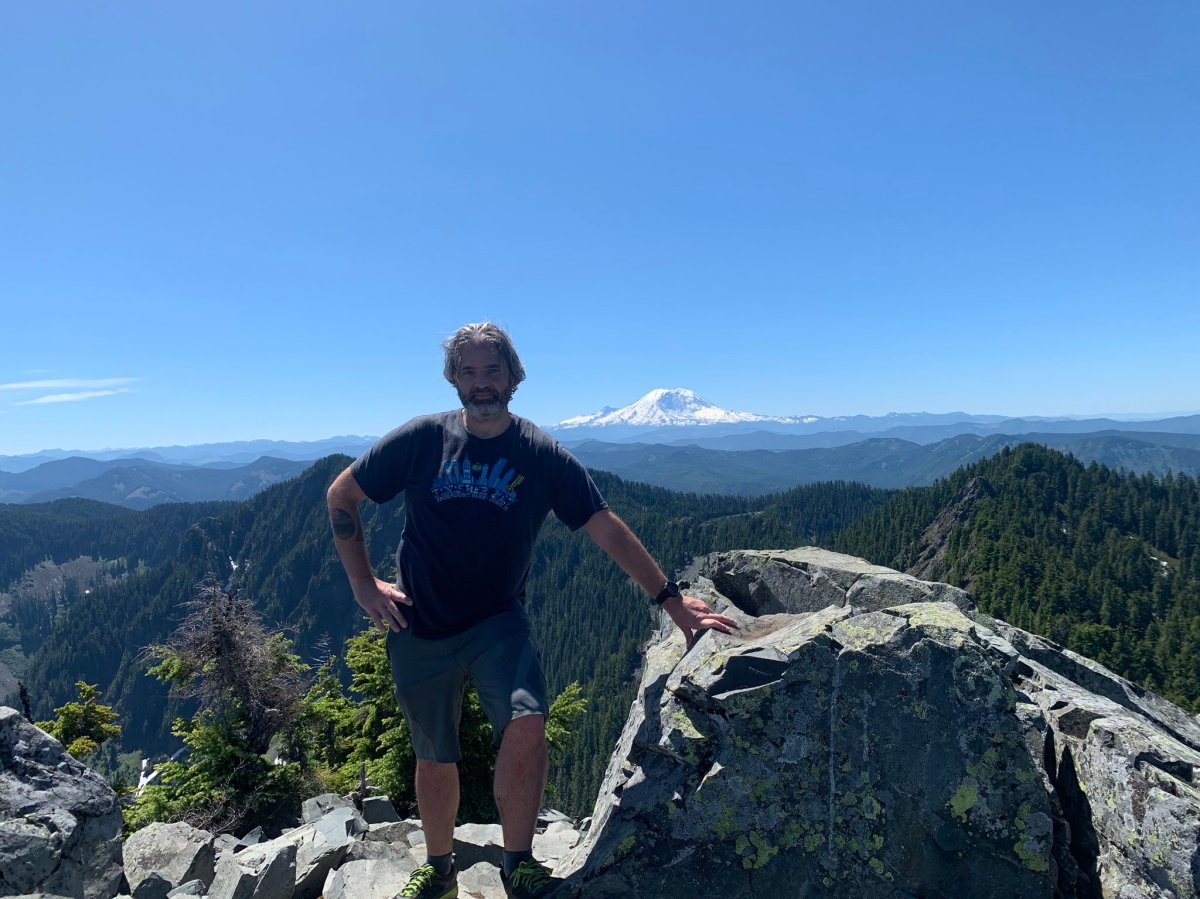 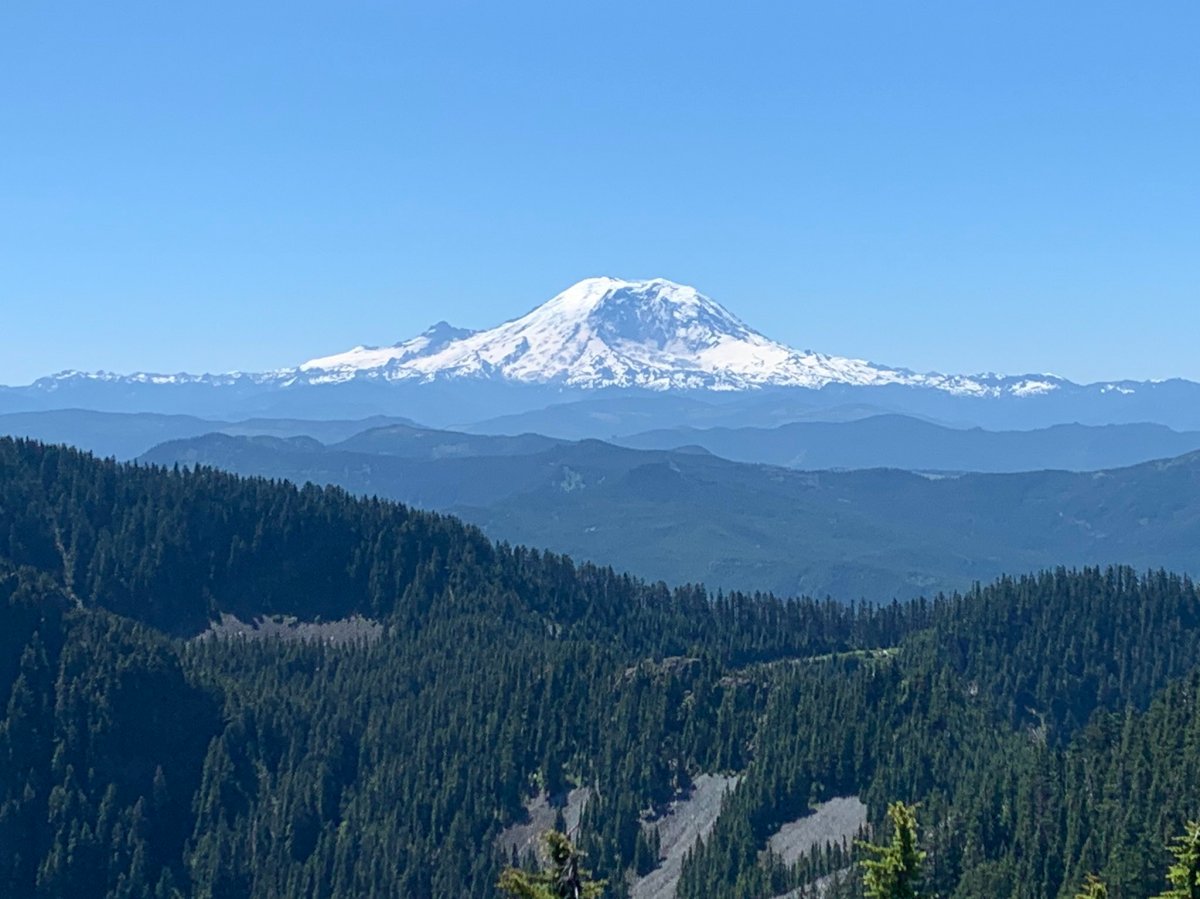 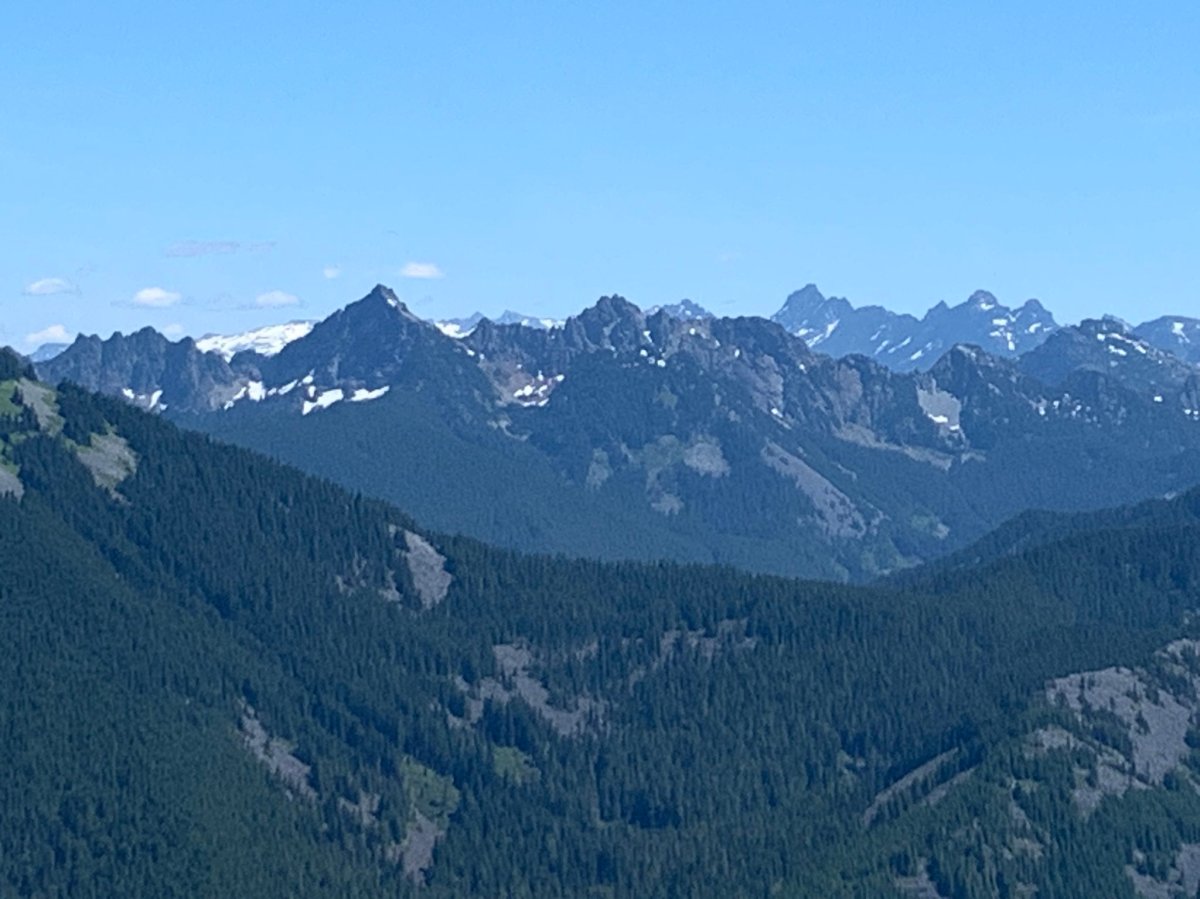 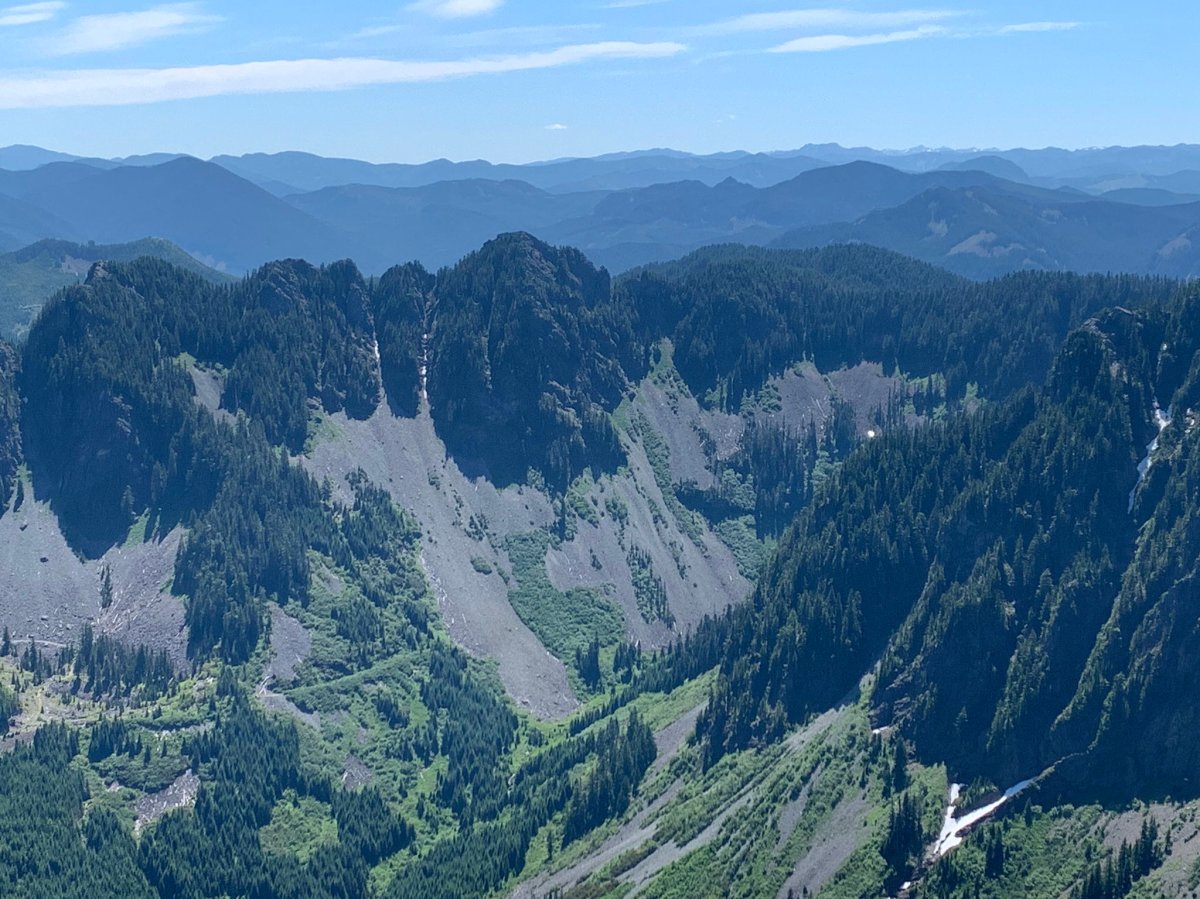 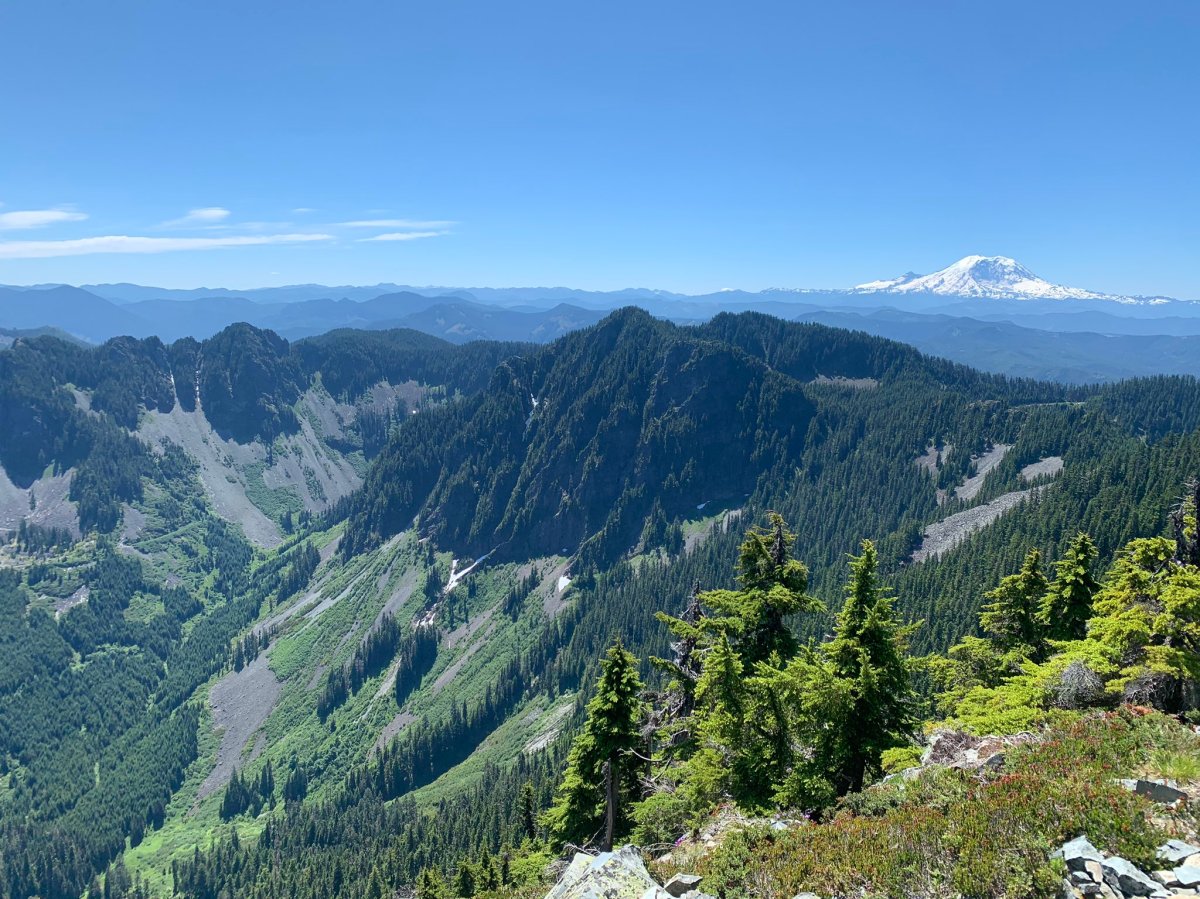 I spent about half an hour at the top eating a sandwich and just gawking. I was a little nervous about the descent, but what can you do? Once you go up, you have to go down. Going down was terrifying. The exposure is inescapable, and it’s obvious that a single mistake would be immediately fatal. In the next two pictures, the first shows the angle that I was climbing down from the side. The second shows how uniform the slope is, and how far you’d fall if you slipped. I suspect it’s about 1000′ feet down. 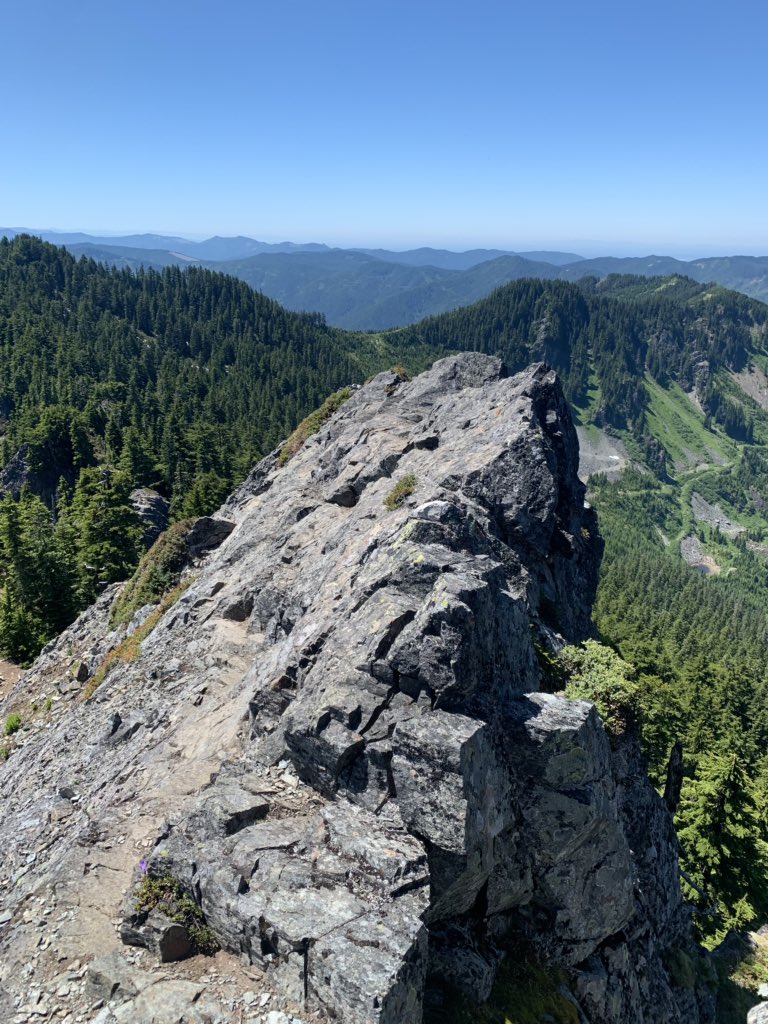 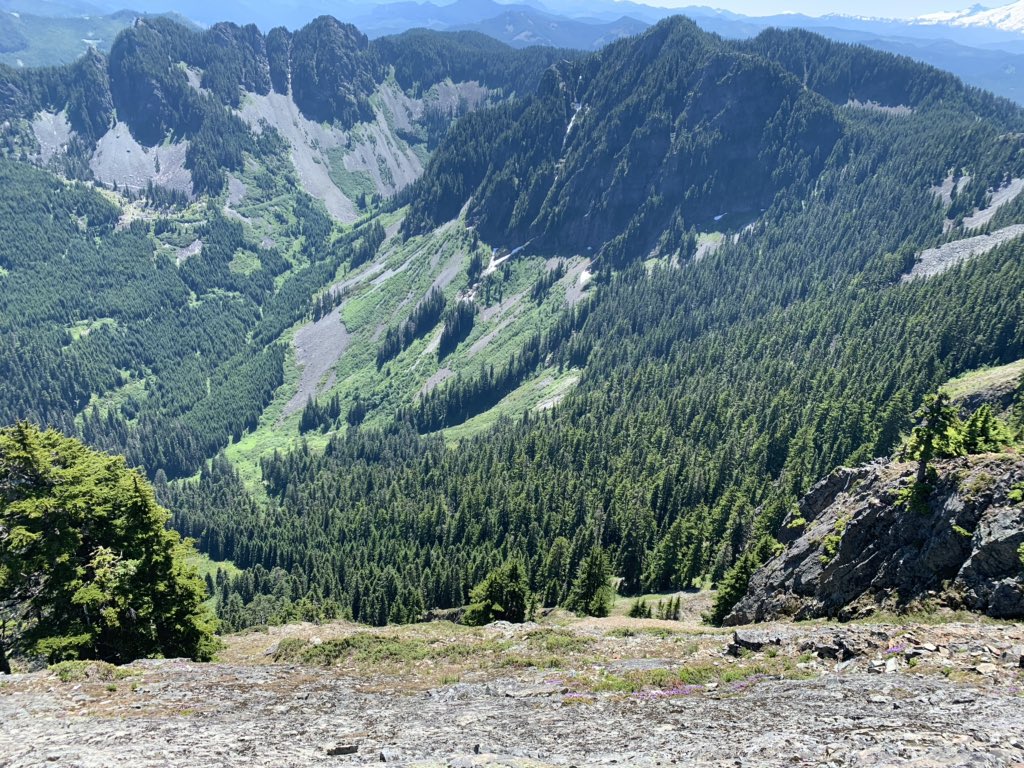 That second picture is the view straight down the mountain, to those trees far below, which are mature firs perhaps 150′ tall. A slip would result in no way to self-arrest. This is a zero-margin for error environment. It was a very scary descent. Even though it’s only about 100′ or so that you have to cover before you reach a safe trail, it took me 15 minutes. Going up was a “three-points of contact” climb. Going down, I decided to sit down on my butt and maintain 4 points at all times. Carefully moving one hand, foot, or my butt at a time to make it down safely.

The Mountaineers – a climbing outfit in Seattle – say, “try to stay a couple of bounces from disaster.” In this situation, if you bounce once, you’re already mid-disaster.

But obviously, I made it safely and only a little terrified. And then the descent was routine from there. Total trip was about six hours, 3600′ gain, and 11 miles. Totally worth it, and definitely a great hike and scramble if you’re not afraid – at all – of heights (and I would recommend no one attempt this scramble in the rain). I’m super glad to have accomplished this as my first solo mountain ascent. It’s a legitimate climb, and very rewarding.