Today we took on our third race of the year, the Chuckanut Foot Race in Bellingham, WA.

This was a very different race for us. It was primarily about doing a race with family. In April, we did a 10K with Gene’s niece. And in May, we set a PR at the Coeur d’Alene half marathon. This was a 7-mile event with his nephew and brother-in-law, neither of them “runners” per se.

We had 16 miles on our training calendar. The Chuckanut Foot Race is a point-to-point event. You park at the start, and then they bus you back from the finish. We figured we’d run the race, fuel up at the finish line fest with the family, then run back to the start, adding another couple of miles in. And that’s just what we did.

Since the Foot Race wasn’t even half our distance for the day, Gene and I agreed to go out at a tempo-ish pace but not push too hard. His nephew left us at the start (because he’s fit and 15 years old). His brother-in-law stuck with us for about the first mile, and then he dropped us too (because he’s also fit and wanted to get the run done). Gene and I stuck to our plan.

The Chuckanut Foot Race started at Marine Park in Bellingham. After about a half mile of residential streets, we were onto the Interurban Trail for most of the race. Though restricted to bikes and pedestrians, the Interurban is wide enough for a decent sized vehicle to drive on it. There’s a bit of gritty asphalt in place but mostly hard-packed dirt, coated with fine gravel or pine needles. We were glad to have opted for road shoes for this trail (though I did have some pebble getting stuck in the grooves of my On Running shoes). 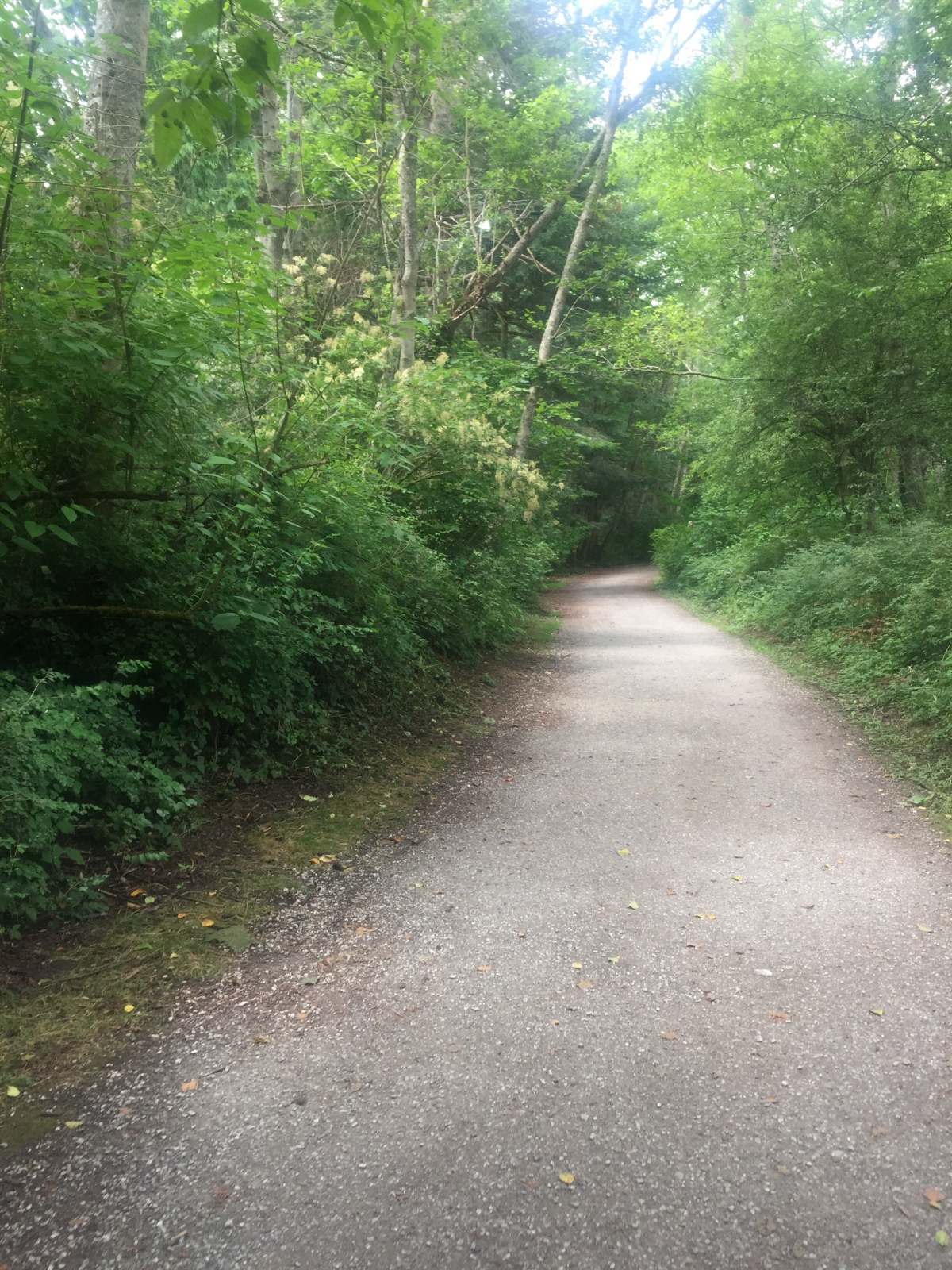 A portion of the race runs parallel to Chuckanut Bay. The views to either side for most of the run were… green. Trees. Ferns. Stereotypical Pacific Northwest flora. An occasional house with what I’m sure are fantastic bay views. There were a couple of breaks in the trees, through which you could spy the bay and a couple of islands. But the trail offered shade for most of the run, which I could see as being a great perk as clouds clear out and temperatures rise.

There was a steep, short climb in mile 3, with a water stop not far past the top. At the start of mile 5, there was an even shorter steep, fun downhill followed immediately by an equivalent climb back up. We ran through the climbs, even the steep ones, knowing they weren’t too long. Most of the trail in between was very low grade up and down. Overall the point-to-point race course accumulated not quite 400 ft of gain and about 320 ft of loss by my Garmin.

We closed out the race in 1:08:36, a 9:48/mi average pace… if you trust that it was a full 7.0 miles. My watch pegged it at 6.9 mi. The longer hill and water stop in mile 3 slowed us a little, but we kept a consistent pace for the rest of the miles and even picked up a bit on the final descent into Larabee State Park. We certainly could have run faster, if it was the only thing we were doing. At one point, I thought, “So this is what a fun run feels like!” 😛 And we got a PR, since 7 miles isn’t a common distance—and not one we’ve done before.

This was a runners’ race. Finisher count was 386, and more than half completed in less than 70 minutes. That’s perhaps unsurprising for a race put on by a running club. The runners and volunteers were all friendly. The course was easy to follow. The organization was spot on. All in all, a fun day. 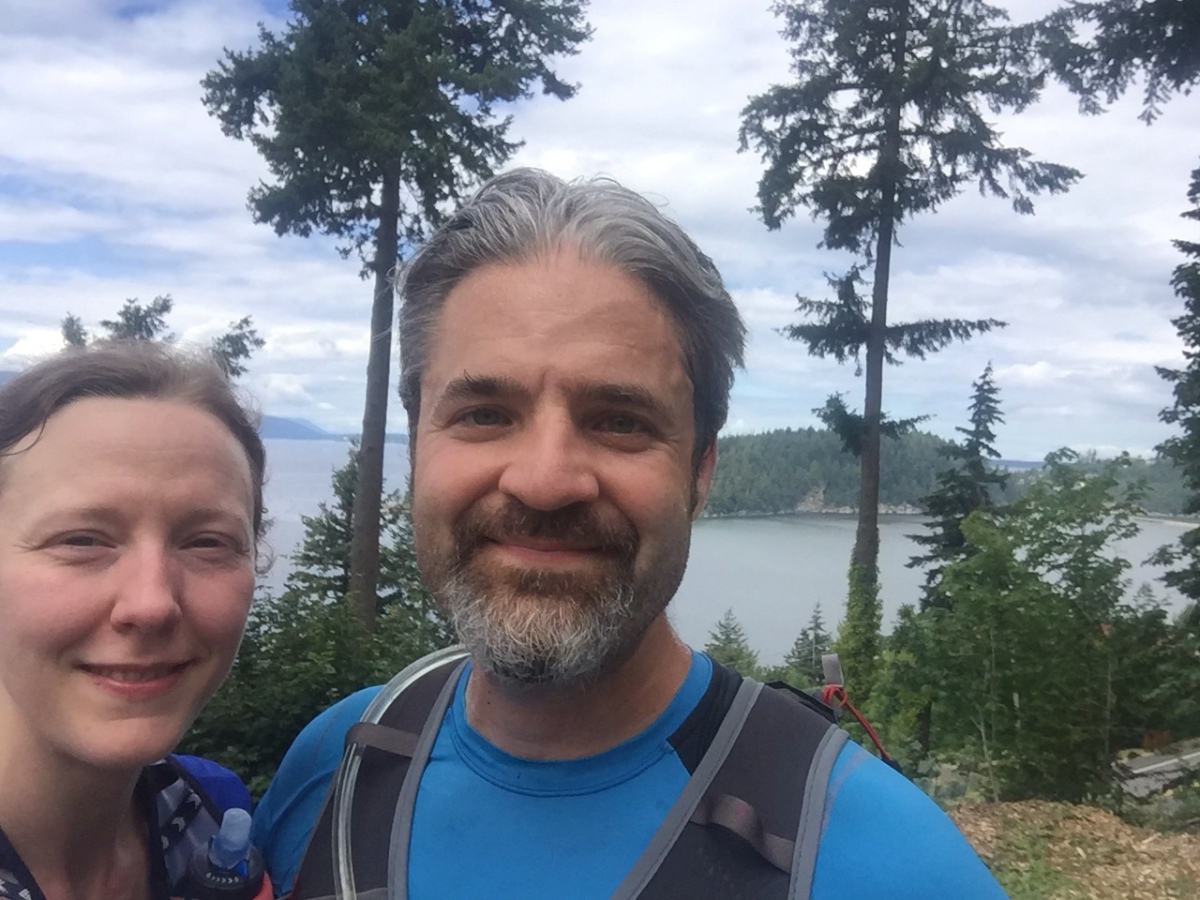 And then we turned around and ran our way back to the start.