Yesterday marked 3 weeks until the big day, the Fragrance Lake 50K in Bellingham, WA. It was also the 3rd of 3 long runs at 20+ miles for this training cycle. We decided to head up to Bellingham and run a couple of segments of the race course.

We split our training run into 2 out-and-back segments, totaling about 10 miles each.

For training runs of 15 miles or longer, we’ve adopted this strategy of breaking the run into segments (either loops or out-and-backs) so that we can use our car as an “aid station”. This has actually worked pretty well because it’s closer to the type of break we’ll have on race day (rather than just fueling on the move), especially for this race. There’s a 7 mile stretch from the start to the first aid station and a 9-10 mile stretch between 2 aid stations just after the halfway point. It’s also been a good way to tune/check our fueling strategy. We pack food in the car that we don’t run with but typically have access to at trail race aid stations (e.g., PB&J, chips, soda). We can refill our bottles instead of carrying enough liquid for a 20-mile grunt.

The disadvantage is that, since the Fragrance Lake 50K has few repeat/out-and-back sections, we could only preview about a third of the course on our 20 mile run. And we actually came up a bit short of a third. On our second segment, we basically lost the trail on the way out, and rather than hunt for it, we detoured. On race day, we’ll be approaching from the other side, and hopefully the trail will be easier to follow from there.

We did succeed in completing the rather daunting descent and return climb along Pine & Cedar Trails—a lovely, unassuming name for a beast of a hill. It’s about 1400 feet over 1.5 miles, with just a couple of short flat sections interspersed. We also completed a shorter but more technical descent—narrow and rooty—that will come earlier in our run. 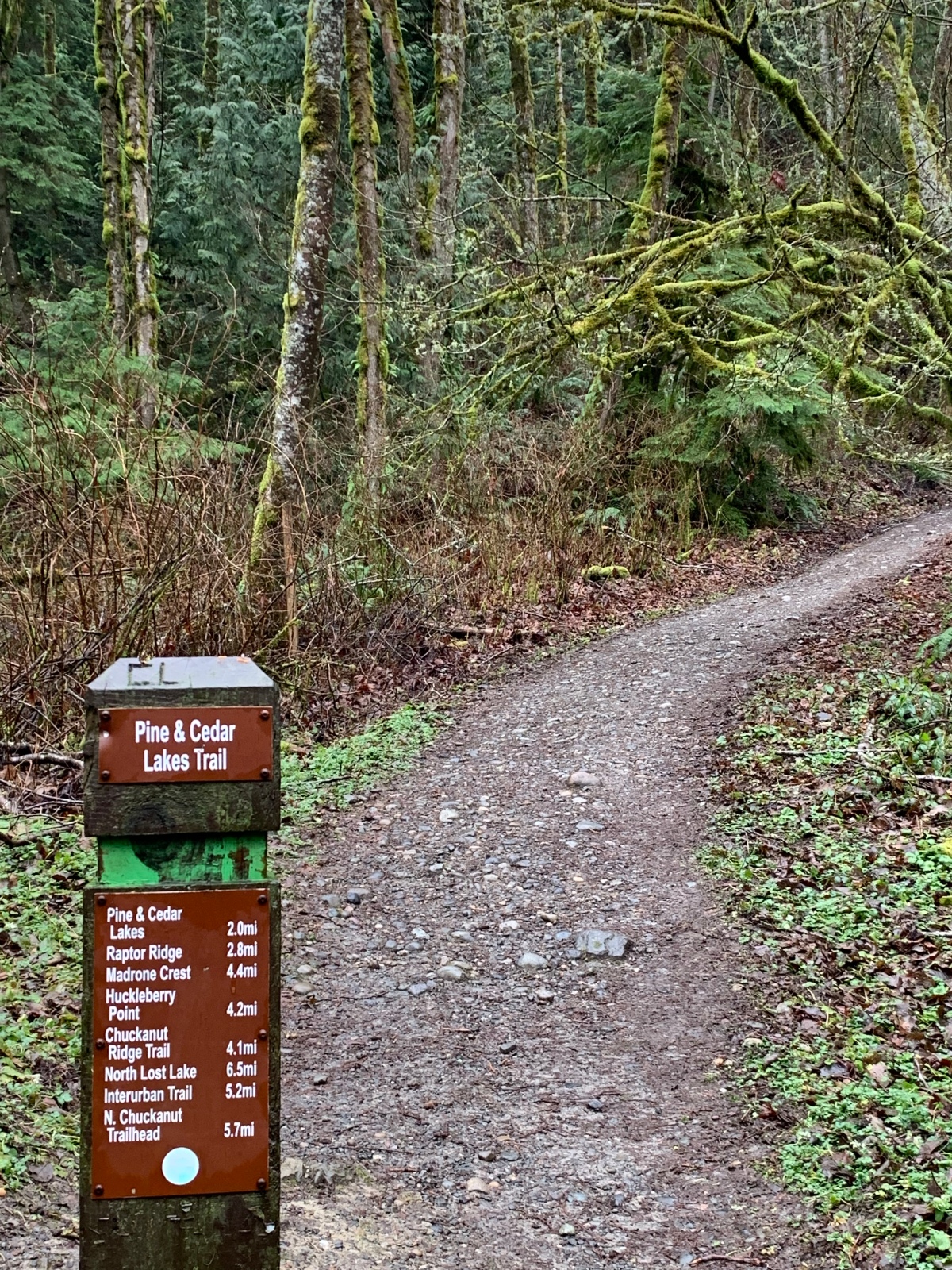 Overall, this training run was a valuable gut check.

We did a run on this trail system earlier last year, but I couldn’t recall the terrain very well. I was glad to see that some of the trails are wide and not particularly technical, and that the single tracks are more dirt than rock (though I think Gene might feel differently—he’s not crazy about roots). Even though we saw less than a third of the course, we got a good sense of the different types of trails and terrain we’ll face.

We also found segments that look like long, steady climbs on the elevation profile actually had several portions that we could run. This was encouraging and showed in our pace. On several of our big vertical gain trail runs at Squawk and Tiger Mountain, we’ve finished up at about 18 min/mi average pace—good enough to clear the cutoff times but not leaving much cushion. Even though we still had a few 20 minute miles yesterday, our average pace was never worse than about 17:20/mi, and at the end our average pace was around 16:40/mi. A minute twenty seconds doesn’t sound like much, but over 10, 20, 30 miles, that accumulates to meaningful times.

I won’t lie. It wasn’t an easy run by any means. But it was a confidence builder. I know that race day will be a loooong day, but I’m feeling good about our ability to finish and beat the cutoffs. It’s time to trust the training we’ve put in.